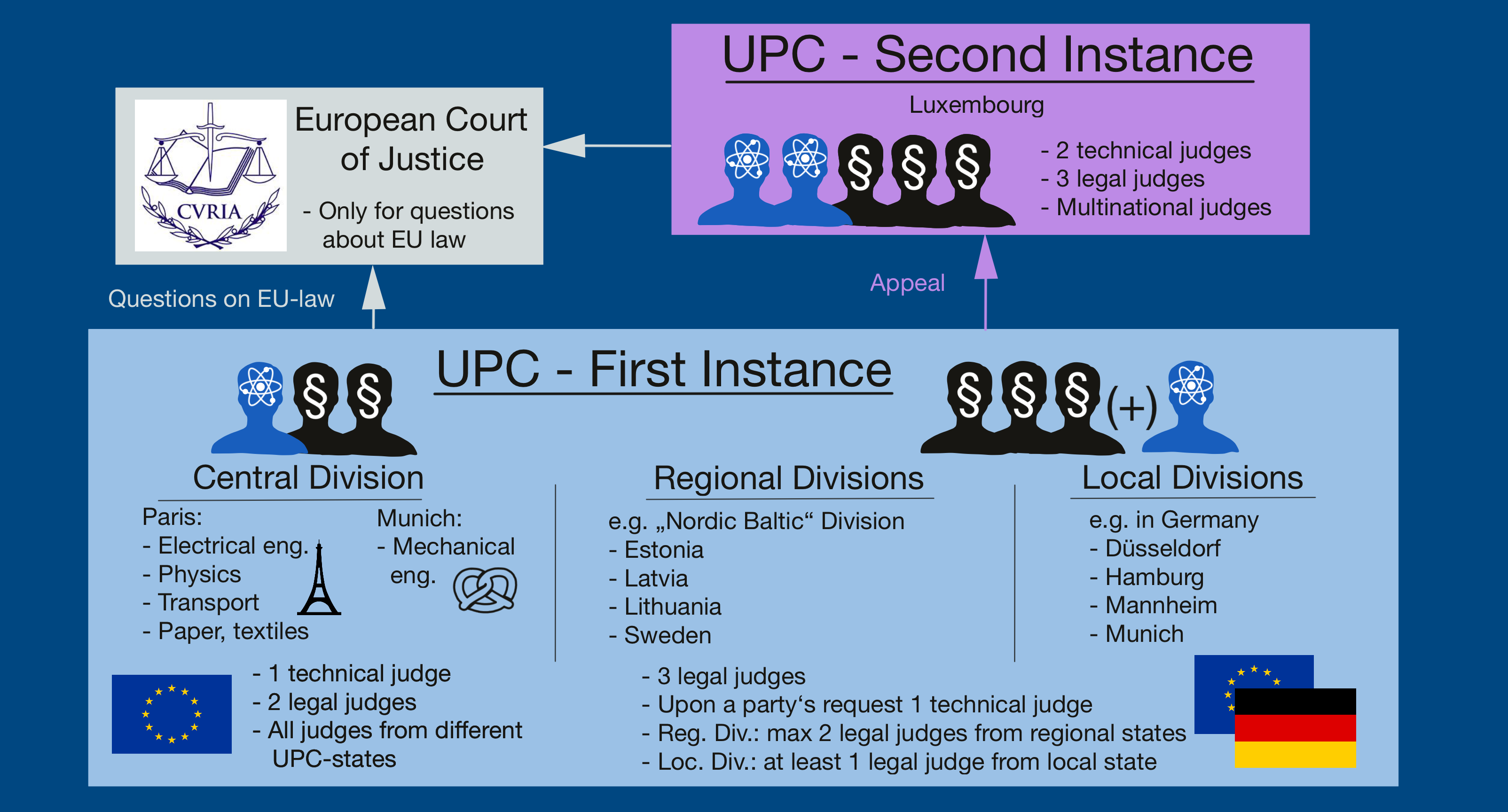 Function and architecture of the Unified Patent Court (UPC)

In our series on the new Unitary Patent and the new Unified Patent Court (UPC), we have already written about the historical background (here), the EU legal basis (here) and the preparatory phase (here). A continuously updated overview of the countdown before the start of the new jurisdiction can be found here.

A description of the function and architecture of the Unified Patent Court is provided in this article.

I. Jurisdiction of the UPC

The Unified Patent Court has jurisdiction over infringement actions and nullity actions based on the Unitary Patent and, in particular, over actions for provisional relief and declaratory actions for non-infringement (Art. 32 UPC-A).

In addition, jurisdiction the UPC has jurisdiction for nullity actions against all pending and future European Patents (as well as for patents based on Euro-PCT applications) which have been or will be validated in a EU state if it participates in the UPC. For European patents, it is possible to opt-out of the UPC jurisdiction.

II. Architecture of the UPC

The first instance of the UPC, which receives actions for infringement or invalidity of a unitary patent, is formed by a central division and local divisions. In addition, it is possible for a group of participating EU states to form a regional divisions.

The central chamber will be divided between Paris and Munich. Originally, a sub-location of the central chamber was also planned in London. However, this has become obsolete with the withdrawal of the United Kingdom from the UPC Agreement (UPC-A).

The sub-location in Paris will be responsible for patents in the IPC classes B (work processes; transport), D (textiles, paper), E (construction; mining), G (physics) and H (electrical engineering).

The sub-location in Munich will be responsible for patents from IPC class F (mechanical engineering; lighting; heating; weapons; blasting).

It has not yet been clarified at which sub-location cases will be heard that were planned at the sub-location in London, which is now no longer planned. This concerns cases in IPC classes A (daily necessities) and C (chemicals; metallurgy). Presumably, they will be split between the remaining two sub-locations. However, a new sub-location in another participating EU state could also be designated.

In Germany, local chambers are planned in Düsseldorf, Hamburg, Mannheim and Munich. These cities also host the most experienced courts for national infringement cases. Due to its four local chambers, Germany will be the state with the most UPC capacities of the participating EU states.

A regional division can consist of two participating EU states. The aim of a regional chamber is to pool expertise for states with fewer patent disputes and thus to be able to obtain high-quality decisions.

A regional chamber should consist of two lawyers with judicial qualifications from the region and one lawyer with judicial qualifications from another participating EU state. As with the central division or a local division, a technically qualified judge from the UPC pool of judges may be called in at the request of a party or at the request of the division.

Competence of the Central Division

The central division is also responsible for infringement actions against potential infringers who are not domiciled in an EU state participating in the UPC, for example against defendants from Spain or the USA (Art. 33 (1) UPC-A). However, these can also be filed in a local or regional chamber. Furthermore, the central division is competent if an infringement action could be heard in a participating EU state but this EU state neither has a local division nor is part of a regional division (Art. 33 (1) UPC-A).

Competence of Regional and Local Divisions

Because of the high level of technical competence and the compelling attraction of invalidity counterclaims, local division or regional division are likely to be the most important first-instance jurisdiction. This will apply in particular to the local chambers in court locations that are already very experienced in patent law, such as Düsseldorf and Munich.

The appeal court is responsible for appeals on decisions of the first instance and is located in Luxembourg (Art. 9 (5) UPC-A).

The chairman will be an experienced judge. Currently under discussion for this position is the German judge Klaus Grabinski from the German Federal Court of Justice (Bundesgerichtshof).

At any stage of the proceedings, a question of EU law may be raised on which the UPC needs a decision of the Court of Justice of the European Union (ECJ). In this case, any instance of the UPC may refer the matter to the ECJ for a decision on the issue (R. 266 UPC Preliminary Procedural Rules).

The ECJ should otherwise have no role. This disempowerment is intended because the ECJ is considered unsuitable for patent law matters due to its lack of technical specialization and its long list of other cases. Therefore, the UPC was established as an international convention instead of a European regulation.

The court costs are paid first by the plaintiff and in the end by the unsuccessful party. This also applies to the costs of the opposing party up to a certain limit. Compared to Germany, more expensive proceedings are to be expected. This is in contrast to the much larger jurisdiction of the UPC, where damages or license payments will also be much larger.

The UPC was designed by practitioners. The focus on technical competence, through the case-based selection of judges with technically appropriate training, is gratifying. Even compared to the Federal Patent Court, with its technical but not case-specific selected judges, the decisions of the UPC should be of higher quality in terms of technical understanding.

The possibility of a counterclaim for invalidity of the patent-in-suit in infringement proceedings is a departure from the German bifurcation system. However, the specialization advantage of the bifurcation system is compensated by the technically competent divisions/instances of the UPC. Thus, the advantage of a compact procedure remains with the UPC, where many aspects (e.g., the amount in dispute, the interpretation of a patent-in-suit, the viability) have to be heard only once. An “Injunction Gap”, as in Germany, is not even possible with the UPC. This is also to be welcomed.

The influences from the United Kingdom (a common law state) are not particularly evident in the architecture of the court. These have been reflected more in the procedural law. If one wanted to, one could see the influence of the United Kingdom in the increased court costs. However, especially companies that place a high value on patent protection of their developments might see these costs as justified by the large jurisdiction of the UPC and the designated resources for an effective, high quality trial.