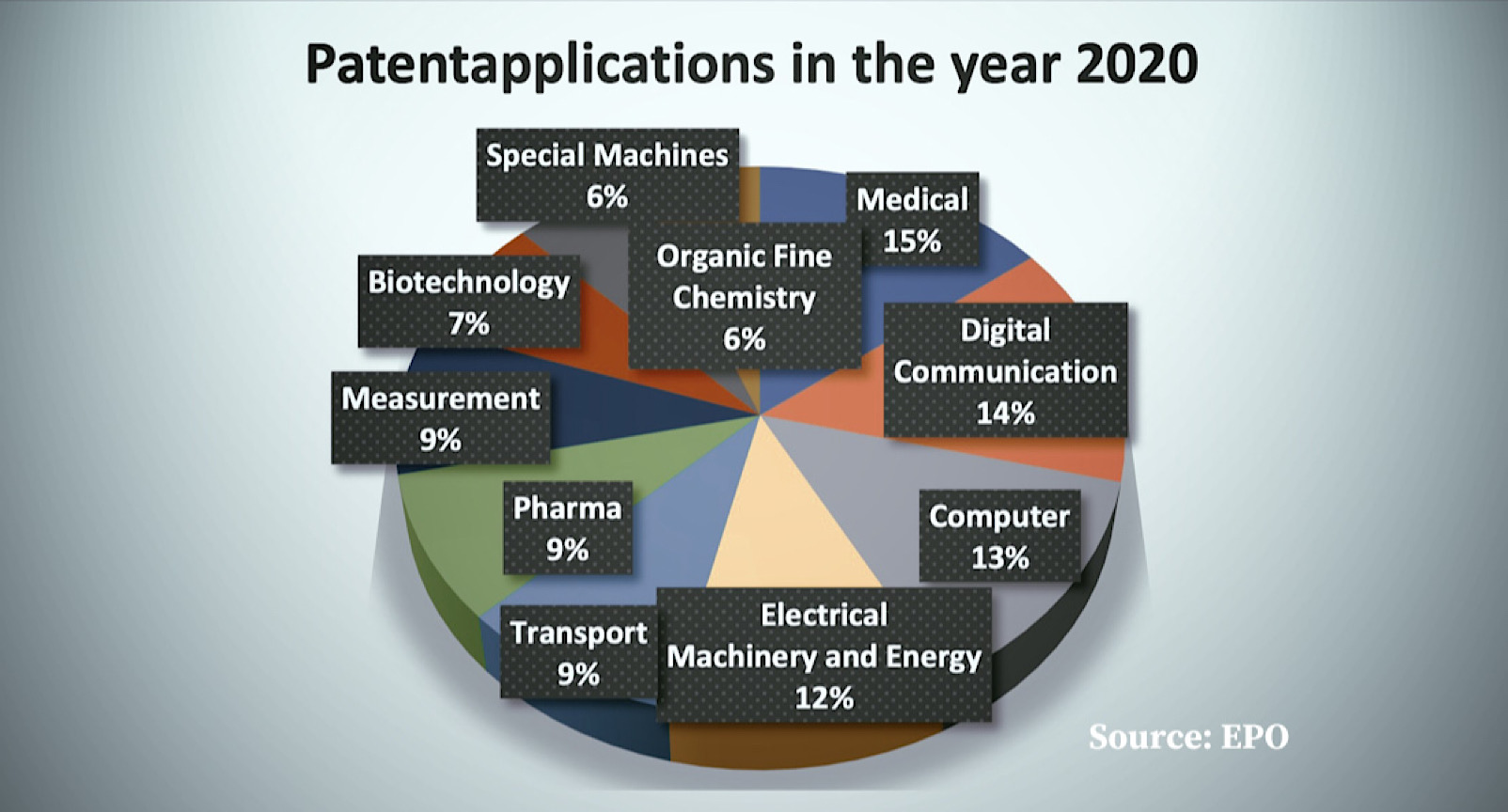 Patents make it possible to exclude third parties from the market for an invention or to demand royalties for it. They also signal innovative strength and professional management. However, they are not the right solution for every startup and are ‘no free lunch’.

The Netflix series “The Billion Dollar Code” is based on the real-life story of the inventors of “TerraVision”, a method for displaying computer-generated images, and their fight for recognition of an infringement of their patent granted for it by the company Google.

This David vs. Goliath scenario seems to be a rare dispute constructed for a broad audience. But such scenarios are not quite so rare in reality. More than 20 percent of patent applications filed with the European Patent Office, for example, come from small and medium-sized companies. Most infringement suits, however, are unsurprisingly directed against large companies.

For startups in particular, it can make sense to protect their own innovations with patents. Investors appreciate this measure because it minimizes the risks of a bad investment and shows professionalism.

What are the requirements and what should be taken into account?

From an economic point of view, patents are a governmental means for the promotion of technical innovations. In return for the publication of her/his technology, the patent holder can exclude third parties from using the patented invention for 20 years.

However, in addition to a technical description of his invention, some investment in capital and communication is required on the part of the patent holder. Basic knowledge about patents and their enforcement also facilitates an economic use of one’s own intellectual property.

Patents are granted for inventions in all fields of technology, provided they are new and based on an inventive step – that is what the law says. Patentable inventions can originate from all engineering fields as well as computer science, biology, pharmacy and chemistry. Patent protection can be obtained for devices, processes or uses.

The prejudice that software-based inventions are not patentable persists. However, this exclusion only applies to inventions in software that do not involve technology. This includes business methods, for example. A method for determining the most loyal customers from a database is not patentable.

In practice, the patentability of computer-implemented inventions (the technical term) is based on the criteria of novelty and inventive step already mentioned. Features of the invention that do not make a technical contribution are disregarded in the examination by the Patent Office.

Computer-implemented inventions now represent a high proportion of the patents granted in the fields of electrical engineering, measurement technology and computer technology. Also the patent of the company “ART+COM”, which was immortalized in the “Billion Dollar Code”, was a software patent. Much better known for software patents, however, is their adversary, the company Google, for example, for its famous patent on the “Page Rank” algorithm, which is still said to work in the search engine today.

For a European patent, costs of approximately €10,000 can be expected until grant. In addition, there are later annual renewal fees in the countries to which the patent protection is to extend.

For startups, there are corresponding funding opportunities in Germany at the federal and state level.

Effect of a Patent

The costs are offset by the powerful effect of a patent. As a rule, the patent owner can exclude any third party from using and selling the patented invention and thus from the market within the national scope of the patent.

A patent is infringed if all features of a claim are realized by a third party. It does not matter whether the patent owner also markets its own products or services. In addition to cease and desist, the patent owner can claim damages for past infringements of her/his patent.

Damages may, for example, relate to the profit that the infringer has made as a result of the patent infringement. The expense of invoicing alone represents a major cost risk. A request for authorization thus often already ensures a willingness to talk on the part of a possible patent infringer. If the allegation of infringement cannot be refuted, this will regularly lead to license negotiations in order to avoid a legal dispute.

An infringement action is the last resort if an agreement with a patent infringer is not successful. In Germany, the district courts in Düsseldorf, Munich, Mannheim and Hamburg come into consideration for an infringement action thanks to their great expertise. Should this occur, the infringing defendant will attempt to have the patent declared null and void. This is done by filing a nullity action with the Federal Patent Court in Munich.

Patent disputes are usually expensive. Litigation values of several million euros are not seldom. For this reason, too, it is important to weigh up the pros and cons carefully and, if possible, to reach an mutual agreement even during the lawsuit.

Patent attorneys can provide more information about the topics addressed. They have a technical or scientific degree and several years of training in intellectual property law.

This becomes also clear in “The Billion Dollar Code”: Negotiating a patent infringement without professional, patent attorney assistance is a mistake that is difficult to correct later.

For startups focused on technical products and services, a patent (or a strategically designed patent portfolio) can be an essential building block for successful and sustainable market access. However, a patent is a powerful economic instrument for which there are a number of things to consider. A trustful cooperation with a patent attorney from the start is therefore advisable.