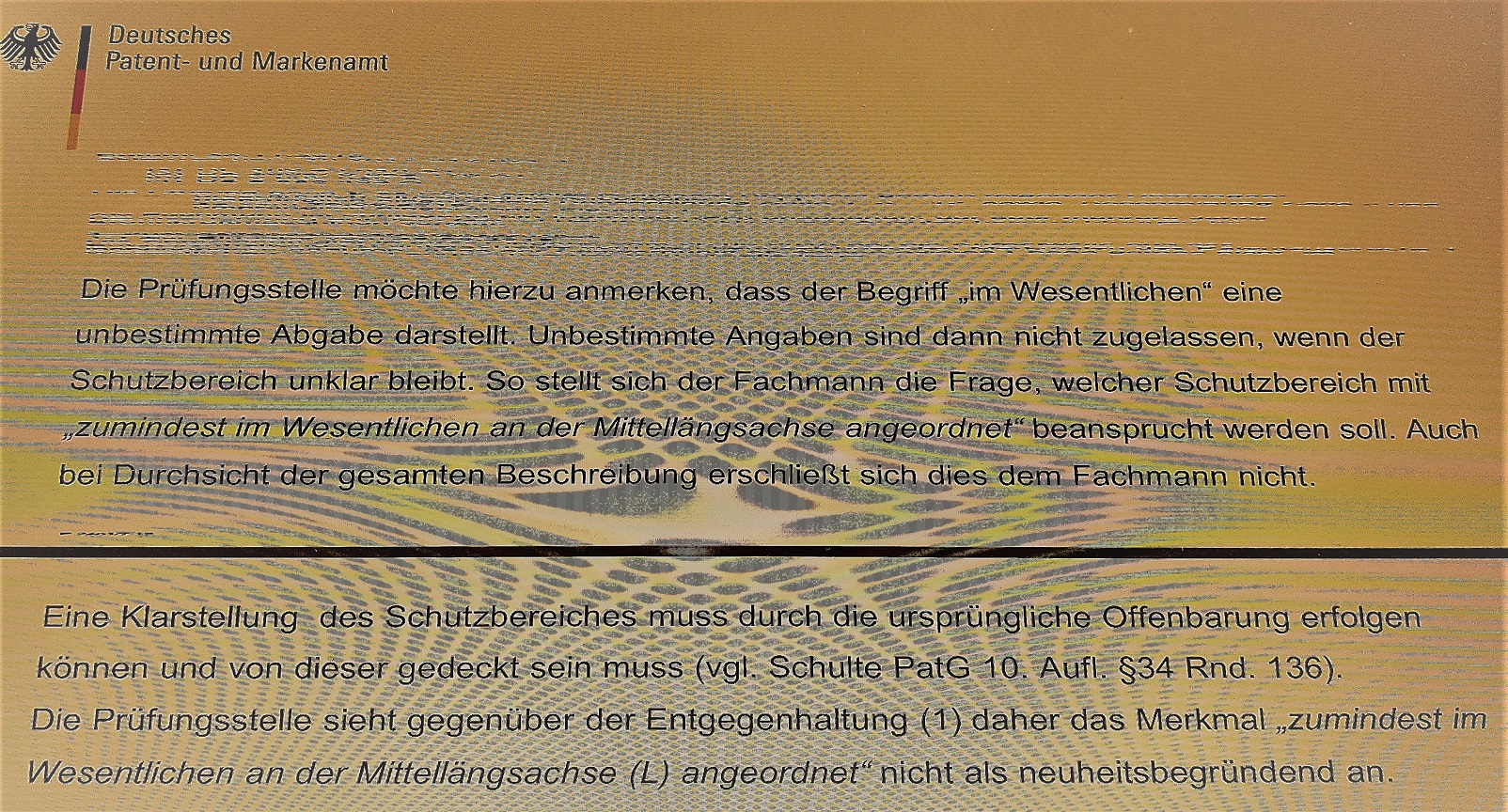 In grant proceedings at the DPMA, the term “essentially” is often regarded as an unclear specification in the patent claim under examination. In the opinion of the author, this reduces the role of the expert too much. There are indications in the BGH case law that support this thesis. And how unexpected: the EPO pursues a very pragmatic approach to this.

I. Position of the Examining Section

In response to the first examination report in a DPMA patent grant proceeding, it was asserted that the drive shaft from the relevant citation differed from the characterizing features of patent claim 1 in particular that the center of gravity at both axial ends was just not essentially in the longitudinal axis of the drive shaft.

In the second examination report, the examining section considered the term “essentially” to be an indefinite specification which was not permissible if the scope of protection remains unclear. Thus, the expert asked himself which scope of protection was to be claimed by “at least essentially arranged on the central longitudinal axis”. Even after reading the entire description, this is not clear to the expert.

Due to the assumed ambiguity, a citation in which the center of gravity of the drive shaft is explicitly and for compelling functional reasons not located in the longitudinal axis of the drive shaft – in other words, the opposite of the claimed subject matter – anticipates the claimed invention. From the assumed indefiniteness, it is thus concluded that the opposite can also be meant thereby.

In the opinion of the author, this understanding passes contrary to the concept of the expert reader of the patent application and can therefore not be appropriate. Especially since the phrase “at least essentially” is common practice in claims and a large number of – also German – patents have been and are granted with this phrase.

According to the understanding of the Federal Court of Justice (FCJ Cooking bin – judgment of the X. civil court of appeal of January 13, 2015 – X ZR 81/13) – albeit from an infringement case – the phrase “essentially” is to be understood as referring to “a practically still significant extent” (marginal no. 25).

“From the point of view of appropriate reward of the inventor, inclusion in the scope of protection of a patent may already be appropriate if the phrases according to the invention are essentially achieved, i.e., to a practically still significant extent”

Determining what is still a practically significant extent in an individual case is a task that the expert automatically performs when reading a patent in his role as a person skilled in the art. With such an understanding, however, the phrase “essentially” does not make a claim indefinite for the expert – as addressee of the disclosure document and, if applicable, of the patent specification (cf. on the technical approach to reading a patent specification FCJ Paper perforator – judgement of the X. civil court of appeal of November 7, 2000 – X ZR 145/98 – p.8 below to p.9 above).

For the author, no reasons are identifiable why the understanding of the phrase “essentially” set out in FCJ Cooking bin marginal no. 25 should not be applied to the interpretation of the patent claim in the grant proceedings. Because to judge what is “to a practically still significant extent” lies exactly in the core of the expert’s assessment. And the expert has this at his disposal when reading the subsequently granted patent, so that he does not have to be protected against such a formulation in the grant proceeding.

Based on the example presented at the beginning, it would therefore be precisely a matter for the expert understanding to assess how exactly the center of gravity of the remote shaft closure from the control output must be arranged on the central longitudinal axis on the basis of the formulation “essentially”, so that a centered center of gravity can be assumed in practice.

For this purpose, the expert additionally has the possibility of a function-oriented interpretation – at least this is how the Federal Court of Justice sees it (FCJ Pipe of vacuum cleaner – judgement of the X. civil court of appeal of October 12, 2004 – X ZR 176/02 – p.7 below to p.8 above), if the wording “essentially” does not in itself permit a firmly defined understanding.

“The Senat agrees with this interpretation. The function-oriented interpretation is appropriate in any case if the wording of the patent claim – such as “essentially” in this case – does not in itself permit a firmly understanding.”

However, the expert’s functional understanding of the feature is not indefinite as it is again clearly shown by the example used:

or the deviation occurs without intention (i.e., without functional justification) due to manufacturing or assembly tolerances or the like; in this case, the center of gravity is already “essentially” located on the longitudinal axis, even if not exactly.

III. Approach from the EPO Guidelines

The EPO explicitly deals with the phrase “essentially” in its test guidelines, and applies a pragmatic rule of interpretation (see EPO Guidelines for Testing F-IV, 7.4.1):

For example, cutting metal is much more accurate than cutting plastic, and cutting with a CNC machine is more accurate than cutting by hand. Therefore, the expression “shell plate with an essentially circular circumference” should be interpreted as claiming the same technical characteristic as “shell plate with a circular circumference”; both expressions claim a plate whose bottom the industry expert would consider to be round.

Thus, also in the examination proceeding before the EPO recourse is made to a technical understanding which leaves no room for indefiniteness of the phrase “essentially”.

While in the EP grant procedure the phrase “essentially” is interpreted pragmatically, in the German procedure opinions are divided. Although widely used, corresponding subject matter is partly granted, partly objected to or rejected on reasons of indefiniteness.

When preparing patent applications and amending claims, the question remains whether to use “essentially” in order to make it clear to the courts in the infringement interpretation that the subject matter should not be interpreted narrowly. Or not, to remove a possible obstacle in the grant. The argumentation presented here may perhaps help to combine the desired interpretation for the granted patent with a lower effort in the granting proceeding.

In any case, the attorneys at PAUSTIAN & PARTNER will continue to keep their heads spinning even on such supposedly minor issues in draft applications and in prosecution in order to achieve the most enforceable and valuable property rights for their clients.